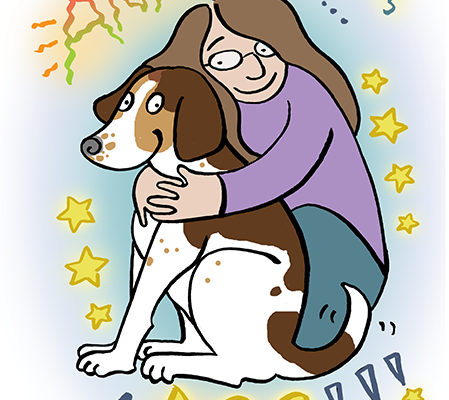 So my parents took the plunge and adopted a dog, after four dull, dogless years. He came from an animal hoarding raid somewhere in Tennessee, where he’d spent his first two or three years in isolation and neglect (from humans- there were at least seventeen dogs rescued from the property, where they were kept together in a pen.) His next stop was a municipal shelter where, his rescuers told us, he was about to be put down in the next couple of days. Luckily, he made a journey to New York, where my parents’ neighbor spotted him lounging on the sidewalk with his foster owner, wearing one of those bright orange “Adopt Me” vests. And the rest is very recent history.

He’s been with my family for less than a week and his personality and intelligence are already shining through. However, everything here is new to him, so he is pretty overwhelmed, as am I. He’s discovering a new world just as I am rediscovering mine. We’ll face it together, two frightened adventurers on a quest for okayness (and treats!)